Sometimes pressing a button and hearing a beep just drives you crazy.  We know.  Below we received some video of a problem where the operator could not move the piston burette up or down on their automatic titrator.  We decided to replicate the problem and then show how to take corrective action.  We hope you find the video informative even though it is raw footage.  Send us your questions too.  Video, audio, pictures, etc.  We can use any format.

WHY DO WE CARE ABOUT BROMINE NUMBER AND BROMINE INDEX ANYWAY?

HYDROCARBONS AND SOME OF THEIR USES

Although the test method ASTM2710 describes the use of an automatic potentiometric titrator the coulometric Karl Fischer method is easier to perform (see ASTMD1492-08e1).

Based on the above principle, the electricity consumed in electrolysis is converted to the exiting bromine.

Prepare the reagents and samples for measurement of bromine number and bromine index.

Use the following reagent for measurement of bromine number or index:

Refer to the below chart for sample size:

Obtain the dilution coefficient in advance according to the following equation:

We hope this information helps you get started.  If you have any questions or would like some help please contact us by clicking on the button below. 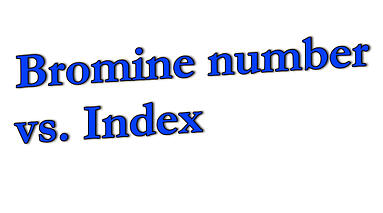 Don’t know whether you need to run a Bromine Number or Bromine Index?  Not sure what the difference is between Electrometric or Coulometric?  And just how many approved ASTM methods are there, anyway?

Well, a good place to start is to check out the comparison table below and evaluate your sample(s) with respect to the scope & limits of products listed for each method.

If you’re trying to decide which of the last two Bromine Index methods to use, remember that the D1492 Coulometric method is most often employed for materials having very low expected values ( > ~20).

Need to run Bromine Number or Bromine Index with an AUTOMATIC TITRATOR?

Interested in getting more detailed information on how to do Bromine using your KARL FISCHER TITRATOR? 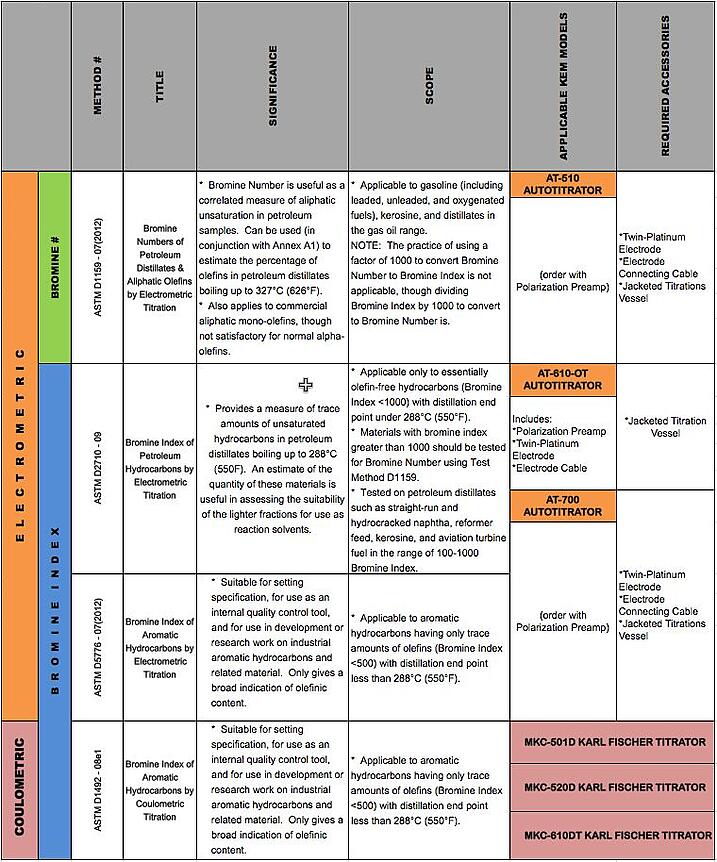